GPS location: 251 Floral Parkway
The Gardens are currently closed for the season.
They will re-open in April. 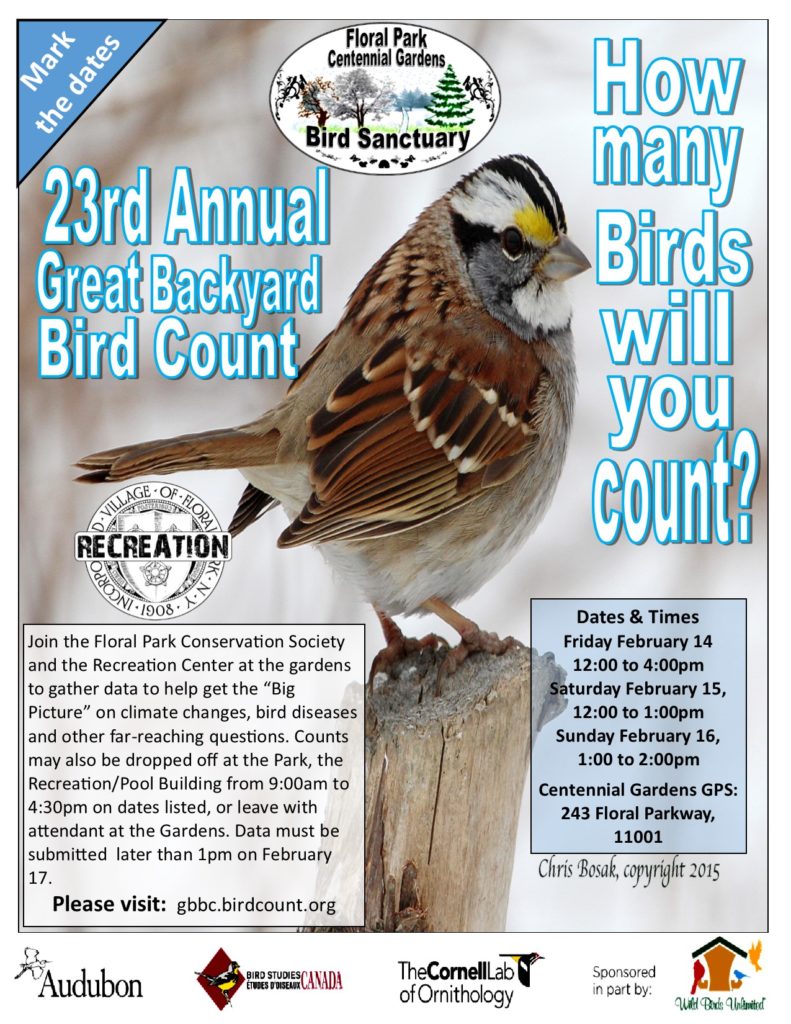 At the Floral Park Conservation Society Garden Party on June 7, 2019, Dennis McEnery was honored for all of his hard work and dedication to Centennial Gardens.

Animals of The Gardens

Birds of the Month

The 12-acre parcel of land serviced the residents of the Village of Floral Park for over 70 years as an active storm basin (or ‘sump’ as some refer to it). During these decades of service, the Nassau County Storm Basin #120 collected storm waters in its primary, secondary, and tertiary basins before passing excess water further down the system to a basin in Elmont. The water table dropped about 9 feet with the placement of storm sewers in the Floral Park area in the late ‘50’s thereby reducing the amount of water generally flowing into the storm basin. Thus, most of the basin is not needed for today’s storms.

The Village Considers the Future

Determining the future of the basin took nearly two years, but a committee of residents living nearby recommended the use of the basin area as a passive recreational area that would capitalize on the trees and birds already in place. In considering the possibilities, it was noted that other communities, including nearby Garden City and Hofstra University, had converted a portion of a storm basin into a bird sanctuary and special planting area. Thus, with the support of over 90% of the residents in the area, the Village initiated negotiations with Nassau County for use of the facility. Negotiations took nearly two years, but the Nassau County Legislature finally approved a renewable, thirty-year lease with the Village of Floral Park. With a lease of this duration, the village has the incentives to make the positive capital improvements necessary to develop the storm basin into an attractive passive recreation area.

The Floral Park Conservation Society (FPCS) was formed by a group of interested community members. They gathered as a non-profit organization to provide valuable services to the community. The beginning meetings were held at the old storm basin. Since that time, the FPCS received the 501(c)(3) non-profit status through the Internal Revenue Service. This allows  donors to deduct contributions to the FPCS from their taxes annually. Dedicated FPCS members contributed over 3,000 hours of labor in 18 months. This began the long, arduous process of transforming the barren lands into a bird sanctuary and landmark garden for our community.

When the Village completed the critical task of locating a new, more decorative fence 20-feet closer to the curb and removing the chain link fence, the FPCS began moving forward by transforming the debris-strewn storm basin and teen hangout into a future passive recreation park.  Over 100 damaged and poor quality trees were removed in the area near the new perimeter path.

The Floral Park Conservation Society invites you to join us!

If you are an expert or beginner at gardening, barely know anything about birds or are a bird enthusiast, come join us as we have a spot for you within the Floral Park Conservation Society. We are calling all people with a trade, a unique vocation, and all types of workers willing to lend a hand. Those with a critical eye and good ideas are welcome too. Anyone who truly cares to make a difference should volunteer.  Please call the Recreation/Pool Building at 516-326-6336 for further information.